This blog post was written by Kevin MacLellan for Food Banks Canada.

The world has changed dramatically since COVID-19 became a part of our everyday lives. For 1.8 million Canadian households, however, one thing has unfortunately remained the same.* Food insecurity is just as prevalent today as it was pre-pandemic, perhaps even more so. That’s because when the coronavirus hit, it didn’t just close businesses and schools—it abruptly ended programs that many individuals relied on for their daily meals. Neighbourhood houses, community centres and after school programs all temporarily shuttered due to the pandemic. 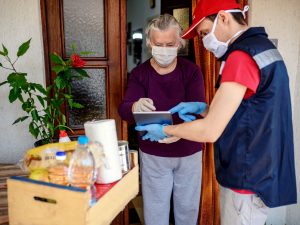 “Just think about that for a moment,” says Chris Hatch, Chief Executive Officer, Food Banks Canada. “While millions of us were concerned about having to line up and physical distance in order to shop for food, millions of others were worried about being able to simply put food on the table.” Talk about perspective.

Yet amidst the closures and the uncertainty, there was still one place people in need could turn to — food banks. However, while many remained open, food banks across the country were facing overwhelming and unprecedented challenges of their own. “In the beginning [of the pandemic], we lost a ton of volunteers,” recalls Danielle McIntyre, Executive Director of the Interfaith Food Bank Society of Lethbridge, Alberta. “There was a huge fear of the unknown and for good reason, as many of our regular volunteers consist of seniors and individuals with special needs. Since nobody knew how long this threat was going to play out for, most volunteers decided to stay home as a precaution. It’s a worrisome place to be in when you consider that food banks in Canada are run mostly by volunteers.”

Another effect of the pandemic was the cancellation of local fundraisers.Food banks rely on these types of events to raise money so they can purchase food and supplies, as well as to cover operating expenses. With restrictions on public gatherings, food banks had to come up with entirely new ways of sourcing money and food donations. Not an easy task when the demand for food was high and food bank resources were already stretched thin.

“60% of the people who came to our doors in the first month of the pandemic were first-time visitors,” explains Norman Dunn, Director General of SOS Dépannage in Granby, Quebec. “With so many in need of food, it didn’t take long to realize that new internal structures needed to be put in place. Plus, we had to do it all with a drastically reduced staff.”

5,600 kilometres to the west, the local food bank in the Yukon community of Whitehorse experienced a 30% increase in demand. “Food security is a regular issue for us,” states Dave Blottner, Executive Director of the Whitehorse Food Bank. “When COVID hit, that issue was taken to the next level. This is due to the fact that in addition to our regular clients, we suddenly found ourselves providing emergency food assistance to an area that extended beyond a 700-kilometre radius of Whitehorse. That’s a lot of people in need and an extensive amount of ground to cover.”

For larger cities, there were also food distribution issues that needed to be figured out.“From the onset of the COVID crisis, our way of distributing food was severely impacted,” adds David Long, Chief Executive Officer of the Greater Vancouver Food Bank. “Up to that point, we used everything from schools and neighbourhood houses to churches and community centres (as food distribution sites). These places were all literally shut down overnight because of immediate social distancing restrictions that were enacted to protect the public.”

This leads to the logistical challenges food banks had to overcome within this new reality. How were they going to get food to the people that needed it? Who was going to help process, pack, and deliver all of that food? Where was the money going to come from? There were so many unknown variables to figure out, to say that it’s been daunting would be an understatement. But the thing about dealing with the unknown is that you learn to adapt, really fast. And that’s exactly what food banks have done. Even when things have seemed impossible, food bankers from coast to coast to coast chose to step up instead of give up. 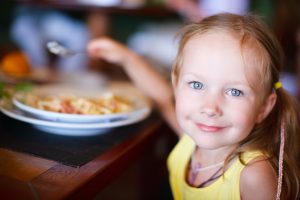 “One of my all-time favourite quotes is from Bernadette in Kamloops,” says Kirstin Beardsley, Chief Network Services Officer at Food Banks Canada. “Bernadette’s motto is if something is impossible, we’ll just do it anyway because that’s what food bankers do. It’s that kind of dedication that keeps our team up at all hours thinking about how to solve the unsolvable.”

While we don’t know what the future holds, one thing is certain. Food insecurity is solvable. However, just like the pandemic, there is no quick solution. But that doesn’t mean we should be complacent. Just because these times are being referred to as ‘the new normal’, doesn’t mean we should ever accept that there’s anything ‘normal’ about Canadians going hungry. But food banks can’t do it alone. Conquering food insecurity is a job that’s going to take each and every one of us to get done.

Although the task may seem insurmountable, if we adopt Bernadette’s philosophy, we’ll be well on our way to eliminating hunger once and for all.

How Food Banks Canada is Helping

Food Banks Canada provides national leadership to relieve hunger today and prevent hunger tomorrow in collaboration with the food bank network from coast-to-coast-to-coast. For 40 years, food banks have been dedicated to helping Canadians living with food insecurity. Over 3,000 food banks and community agencies come together to serve our most vulnerable neighbours who – last year – made 1.1 million visits to these organizations in one month alone, according to our HungerCount report. Since 2010, as a system we’ve sourced and shared almost 1.5 billion pounds of food and Food Banks Canada shared over $100 million in funding to help maximize collective impact and strengthen local capacity – while advocating for reducing the need for food banks. Our vision is clear: create a Canada where no one goes hungry.

Learn more and make a donation in support of Food Banks Canada today.