This post is part of our refugee series, Leaving Home: A Series Exploring the International Refugee Crisis and is provided by Elizabeth Dove, Co-Founder and Coordinator of DECA Connects which organized the Sleepout for Syrians fundraiser. The multi-part blog series features stories from those on the ground, as well as the response from charities and Canadians across the country.  In this blog, we hear how one Toronto community came together to support refugee families coming to Canada. 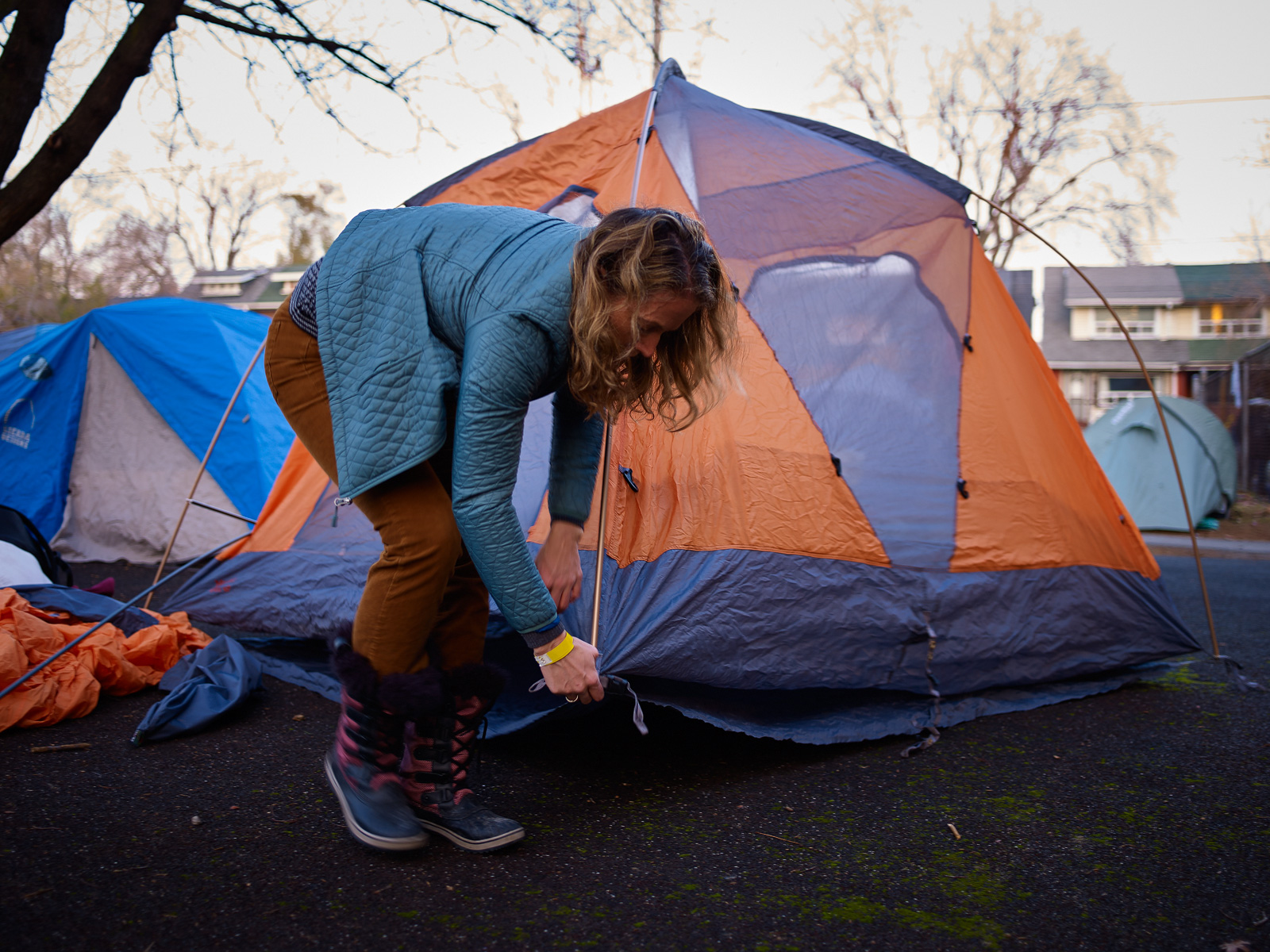 Some ideas are too enormous, too audacious, or too perfect to ignore, even if they scare you.  This was the exact situation facing seven East Toronto residents as we sat at a pub last October, mulling what our residents’ association could possibly do to help Syrian refugees escaping their war torn home in search of a new and safe place to live.

Like many people around the world, our fundraising journey started with a boy on the beach.  The image of 3-year-old Alan Kurdi lying face down on a Greek beach kicked us all in the gut. Kurdi, his mother, and his brother were on an inflatable boat trying to escape to the Greek Island of Kos but drowned leaving Alan on the shore of the Mediterranean.

In aching contrast to the realities of Syrian families, our Danforth East community in Toronto is a community characterized by safe streets, community fairs, farmer’s markets and splash pads for our children. The Danforth East Community Association (DECA) had been formed to continue building a better community.  Our committee, DECA Connects, had been formed to help build the neighbourhood’s sense of community by addressing local social issues.  Syria was far from local, and yet a single photo had made the plight of Syrian families our problem.  It was then we committed ourselves to organizing a “Sleepout for Syrians” in six weeks to raise $5,000.

As we shot around – and shot down – ideas, eventually the idea came to us: we would sleep outside, in December, in solidarity with the refugees in camps and ask our neighbours and friends to sponsor us to raise money for a local settlement agency helping to bring families safely to Canada.  My first thought: outside in December? How will I get out of this?!

We did some quick math on napkins: if there were 20 tents with 20 families or groups committed to raising $250 each we would reach our goal.  But what if we couldn’t get 20 tents?  Would each of us agree to a tent? Maybe DECA could kick in some money if we don’t reach our goal? Several members our group brushed aside the concerns—we’ll build it, they will come, this will happen they said, and I love these friends deeply for that moment of unquestionable faith. We assigned tasks and left the pub with a bright hot ember in our bellies: the certainty it would work, even if we didn’t know how, yet.

The first task was to confirm where we would host the sleepout. We soon discovered you can’t sleep in public parks.  The parking lot outside of the local mall was hard,  Washrooms were something to consider. But we finally found the best solution imaginable: we could sleep outside of The Church of the Resurrection on Woodbine (and use their washrooms). We even chose to do a “pre-sleep” community party where there would be music and food so those who did not sleepout could still be part of the fundraising efforts. Money raised at the pre-sleep party would support the church’s efforts to bring a refugee family, and the church kindly offered to cook a warm breakfast for sleepers. The plans were in motion and with four weeks to go, we needed to pull off the rest.

With a clear, shared vision, we each worked and emailed each other our successes: Press releases are out and the media is calling! A designer agreed to make a poster! Outward Bound heard about us and will donate winter camping gear! We have more than 40 campers!  A local group of refugees from Adam House wants to cook dinner for the campers at the pre-sleep!  More donations continued to come in and within 10 days of our first press release, we met our $5,000 goal.

As the group spokesperson, I was receiving requests for local and national interviews in both English and French.  Attention peaked in the week before the event, and with it, so did our donations via CanadaHelps. We hit $10,000, then $15,000, and then eventually nearly $25,000. In part due to our funds and the media exposure, our community partner, The Neighbourhood Group, increased their goal of sponsoring one refugee family to three families as donations increased.

The night of the sleepout was magical. From the dinner, to the music, to the moving speakers, to making friends around fire barrels with donated hot chocolate, and even the constant presence of live news channels on site—it was all beautiful. We marveled at how this was all bigger than we could have imagined in terms of both logical matters and the exponential, unexpected generosity and sense of community.

Too wound-up to sleep (and frankly too cold) I got up at 6:00 a.m. and wandered through the tents. It was then that I discovered a piece of paper someone had handed me, but I had forgotten in the evening’s craziness. On the paper was a list of the comments that some donors added to their CanadaHelps donations. They were passionate words of heartfelt thanks from friends, co-workers, aunts and uncles, and strangers. I was moved to tears. By sleeping out, and giving others a chance to donate to the effort, our sleepers had given each of these extremely grateful donors the chance to be a part of something that was going to create more happy endings for refugee families.