The international refugee crisis is one of the most pressing global issues of our time, with hundreds of thousands dead, and millions still displaced and injured. In response to the ongoing crisis, Canadians across the country and around the globe have responded, and in this introduction to our new blog series, we take a closer look at the international refugee crisis from on the ground and how Canada has responded which includes a sneak peek at an array of different angles and perspectives included in this growing series which we invite you to engage and participate in by sharing your story.

An Introduction to the Series 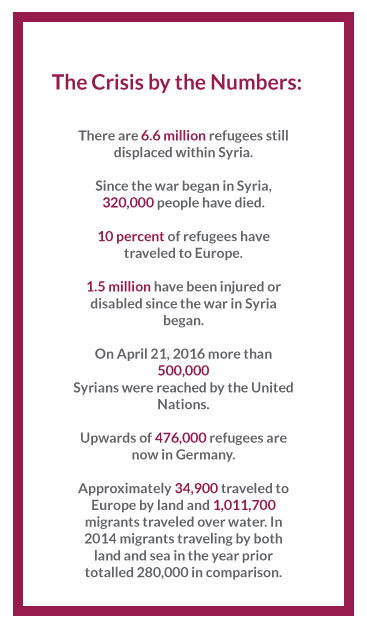 When the world saw the heartbreaking image of the lifeless body of three-year-old Alan Kurdi washed up on a sandy beach shore last fall, the image painted a very sad and tangible picture of an ongoing international crisis affecting millions half a world away. Lying face down in the sand, Kurdi drowned in the Mediterranean Sea, along with his mother and older brother after boarding an inflatable boat from Bodrum, Turkey, to seek refuge in the Greek Island of Kos, after living through the intensifying civil war in Syria.

Along with Kurdi and his family, there are a total of 4.8 million Syrian refugees with more than 50 percent representing children 17 years and younger. 45.6 percent between the ages of 18 to 59, while 2.9 percent of Syrian refugees are 60 years and older. The numbers are staggering.

But Syria isn’t the only country facing war, violence, and a surge of people fleeing their homes in search of a safe place to call home. On top of the 350,000 Syrians who applied in 2015 to seek refuge in Europe, close to 200,000 Afghans, more than 100,000 Iraqis, and close to 50,000 Pakistanis also submitted asylum papers with their hopes set on Europe. Although there have been endless stories of hope through the unraveling of the refugee crisis—stories of people arriving in their new home and welcomed by a community with open arms, stories of children going back to school for the first time in years, or stories of reunited families finally safe after living in danger for years—on the ground and in neighbouring countries, the situation remains grim.

Faced with starvation and malnutrition, there is still the imminent threat of airstrikes, shellings, and violence from the war, and for the hundreds of thousands able to escape, there are millions who have been left behind and are in flux while living in refugee camps only in search for a place where they can live their lives without fear of violence and harm.

Following one of the most desperate international humanitarian crises in recent history, Canada has opened its doors to welcome thousands of refugees fleeing their homes for their own safety. Many have left everything behind and are coming to a foreign land with unfamiliar cultural practices, an unknown language, and very little to restart their lives in a safe place without the fear of kidnappings, shelling, bombs detonating, aerial attacks or other very real and harmful threats putting their lives in danger on an everyday basis.

Since November government assisted, blended visa office-referred (BVOR), and privately sponsored refugees have landed on the tarmacs of Canadian airports and are now working to restart their lives in a new and foreign land far from home, but they are not alone. Helping them along the way are Canadians from coast, to coast, to coast, providing them with the support they need and a warm welcome as they continue to make their way to a very unfamiliar place far from home. Whether it is help from government, average Canadians fundraising to sponsor a refugee family, or charities and non-profit organizations working directly to support and help settle our new neighbours into their new home, our sense of giving is not lost and is very much evident when listening to stories welcoming and providing a helping hand to our new neighbours.

Canada’s Response by the Numbers:

Over the course of the next few weeks, we will be sharing different stories from the crisis coming from both on-the-ground in countries closest to the situation, and here at home. From welcomes, to updates on the current situation, this growing blog series authored by various perspectives and angles will tell the stories of communities working together to welcome new neighbours, while also shedding light on the ongoing crisis affecting millions fleeing from their homes. Below is a sneak peek on the stories to be released as part of our series, and keep checking back for more stories to be added as this series evolves.

When 12 Toronto professionals heard about the international refugee crisis happening thousands of miles away, the news hit home for each in a very different way. Working together, these 12 average Canadians are helping one Syrian family start their new life here in Canada by welcoming them with open arms to Toronto’s Harbour.

Imagine living in a home without a couch, a table, a single chair, or even a utensil in your kitchen. For many refugees fleeing their homes to move to a land far away, furniture is oftentimes the last thing on their mind when settling into a new culture, a new home, and a new life. For many refugees, the inability to live comfortably without any furniture impacts their physical and psychological wellbeing, and because of that the Furniture Bank is working to end furniture poverty.

For millions of refugees worldwide, the adverse challenges faced while fleeing the dangers of their homeland can be unimaginable. Their experience oftentimes involves malnourishment, unhygienic conditions, or other issues unique to their current situation, but it is the experiences of female refugees who face different challenges and troubling situations from men fleeing their homes alongside them.

Making an impact across the country, the Community Foundations of Canada has partnered with members of corporate Canada to help ‪‎welcome refugees‬. Partnering with GM, CN, and Manulife to help provide a warm welcome to refugees settling into their new homes across Canada, the Community Foundations of Canada explain how they are connecting the for-profit and non-profit world to make a massive impact.

The Journey North: Stories from those Displaced in Syria and International Refugee Camps | GlobalMedic

Sparking Hope Through Education | The Spark of Hope Foundation

Imagine being born and living in a refugee camp that has a 67 year history and has been subject to intense bombardment and frequent fighting. Welcome to the Ein el Helweh refugee camp, the most populated and volatile camp in Lebanon, where 25-year-old Aya Al Sayed was born and grew up in. The camp has poor living conditions, education, health conditions, and security but with the help of The Spark of Hope Foundation, Aya’s education is providing hope for her and her family.

From teachers in the Arctic Circle to university students in the Netherlands, one Canadian charity is gathering people from around the world to help educate Syria’s children through the use of tablet technologies, but they are doing so much more in the process. At Rumie, tablet technologies are not only educating the next generation, they are also helping the youngest migrants cope with the realities they are facing as refugees fleeing home.

When fleeing home in search of a safe place to live halfway around the world, refugees can feel isolated and disconnected from their new home and neighbours. To help heal and begin again, Turtle House Art/Play Centre is using the arts to connect and welcome Canada’s newcomers.

When members of Toronto’s Danforth East Community Association saw the gut-wrenching image of little 3-year-old Alan Kurdi lying face down on a Greek beach, the community could not help but think of the aching contrast their lives had to the realities of Syrian families. Their community in East Danforth is characterized by safe streets, community fairs, farmer’s markets and children’s splash pads, while the children living in Syria and surrounding regions are faced daily with the threat of shellings, kidnappings, and violence. After meeting one October day, members of the Danforth East Community Association decided to work together in order to help families just like them living in very different situations.

When a family travels to Canada with only the clothes on their back and few other belongings with them, finding a safe and welcoming place to call home is a top priority. From culture, to schooling, identification, or accessing vital healthcare, everything is new and very unfamiliar to refugees fleeing home and coming to seek refuge in Canada. But when families reach Winnipeg, Manitoba, they can be assured that they will receive the help they need from one charity helping refugees make a house a home. New Journey Housing is on-the-ground in Winnipeg, Manitoba making a difference by ensuring refugees and newcomers have a safe and welcoming place to live.

A Lifetime Without A Home | Save the Children

With more than 60 million refugees worldwide, most people would be astonished to learn that half of that population is made up of children. That means that more than 30 million innocent children have had their childhood snatched away from them because of violence causing them to flee from home. But at Save the Children, their mission is to help children in need, and in their guest blog, they tell us how the ongoing plight facing the world’s youngest citizens is impacting a generation as they leave the only home they have ever known to escape to an uncertain future.