Imagine plotting the world’s largest disasters on individual graphs.  In most, but not all cases, there would be an initial “spike” of destruction immediately following the catastrophe. This spike would represent the first few days of chaos, and as the damage gets surveyed, assessed and eventually treated, that spike would slowly slope downwards towards normalcy.

Typhoon Haiyan, which wreaked havoc on the Philippines around November 7 and 8, 2013 was different.  Those of us tracking the approaching typhoon on the other side of the world in the days before landfall did not know what to expect.  To be honest, most of us were only really keeping one eye on the coming storm.

Haiyan hit, and then came the numbers. Initial weather reports said this could be the strongest storm to ever make landfall.  As we jumped online, started calling local partners in the Philippines, checked Twitter, and looked for local reports of damage, we were shocked.

Nothing. There was absolute silence.  No information.

We waited. And waited. And slowly, reports started inching their way out of Eastern Samar and Leyte.  Little by little the story came together. This was a bad one.  Instead of a “spike” on the destruction graph, this was a straight shot up after a brief flatline. The first few hours of silence was a result of all communication networks being completely destroyed.

When the scale of the disaster became clear, GlobalMedic responded immediately.  We deployed our specialized Rapid Response Team and mobilized our Philippines team. Within days we were providing thousands of litres of clean drinking water daily in some of the worst hit areas.  Shortly after that, we flew a number of massive super shelters to act as field hospitals in place of local medical centres that were damaged by Haiyan.  We also set up a Newfoundland-made 2576 sq ft inflatable field hospital that saw hundreds of patients daily.  We supplied our hospitals and local health clinics with over $500,000 worth of essential medicines.

To ensure families stayed safe from the elements, we distributed over 350 transitional shelters.

The photos and reports from our teams on the ground in those early days were beyond belief. Mile after mile of dead bodies, ruined homes and ruined lives. 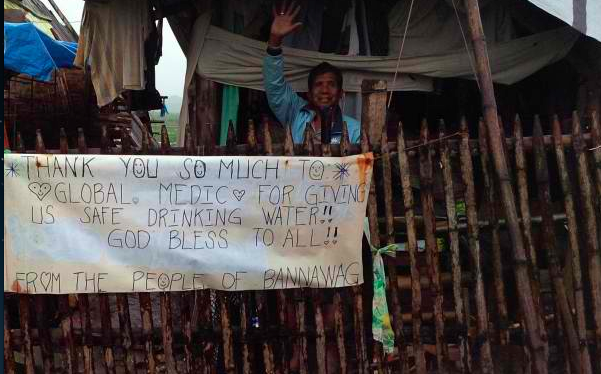 The disaster phase of the response to Typhoon Haiyan lasted for several months.  Now that this has wrapped up, GlobalMedic has transitioned its programming into providing permanent homes for families. We have a very unique machine – the Impact 2001A – in the field. This machine turns dirt into blocks.  We are finishing work on the first round of homes, and we will continue to build houses in the months to come. 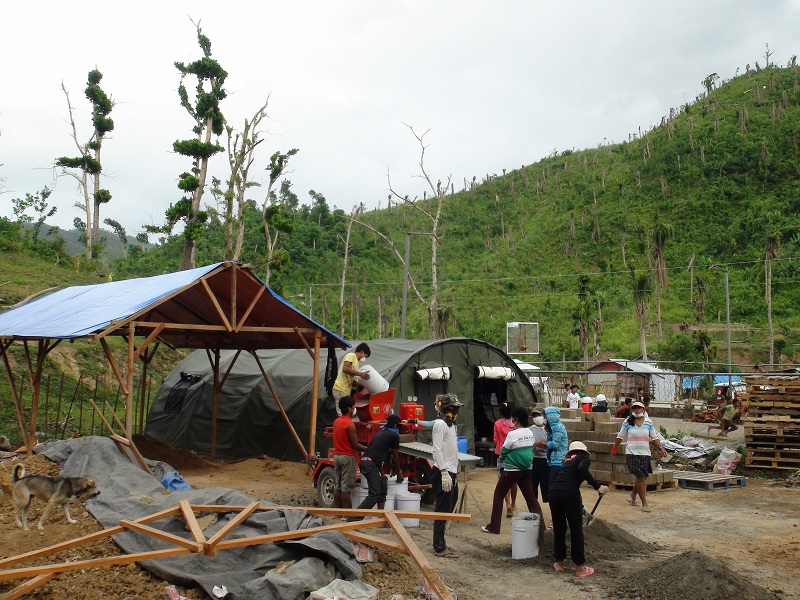 We are also running a hygiene program as well as well rehabilitation.

Despite the world’s best efforts, the “spike” for this disaster is returning to normalcy much too slow.  More help is needed. Families need homes, access to permanent water solutions and proper medical infrastructure. Canadians were generous in their support of Haiyan relief efforts, but there is a long way to go before people living in the hardest hit areas can get back to their normal lives.  GlobalMedic’s work is not over, nor is the time to support recovery efforts.

GlobalMedic is the operational arm of the David McAntony Gibson Foundation (DMGF). DMGF is a registered Canadian charity that runs capacity building programs in post-conflict nations and provides disaster relief services to large-scale catastrophes around the world.  The response team is comprised of professional Canadian rescuers – including paramedics, police officers, nurses, doctors and firefighters – who volunteer their time and skills to help those in need around the world. Together they form three units: a Rescue Unit designed to save victims of structural collapse; a Water Purification Unit positioned to provide clean drinking water to victims; and an Emergency Medical Unit that uses inflatable field hospitals to restore medical infrastructure and provide care to affected populations.

GlobalMedic has deployed to over over seventy international disasters in the past five years. In 2011 and 2012, GlobalMedic responded twenty-six times, including the earthquake and tsunami in Japan in 2011, the devastating floods in Pakistan 2011 and 2012, and the refugee crisis in Lebanon resulting from the Syrian war in 2012. Learn more about Global Medic on their Charity Profile Page.

Andrew Budziak, the Emergency Programs Officer, joined GlobalMedic in December 2012 after spending several years at the Canadian Broadcasting Corporation (CBC). He has reported and produced for radio and television programs across Canada and around the world. Prior to joining GlobalMedic full-time, Budziak deployed as a volunteer to respond several times internationally on emergency response and capacity building projects. Budziak graduated from the University of Toronto with a Specialist Degree in History and a Post Graduate Diploma in Journalism from Concorida University.