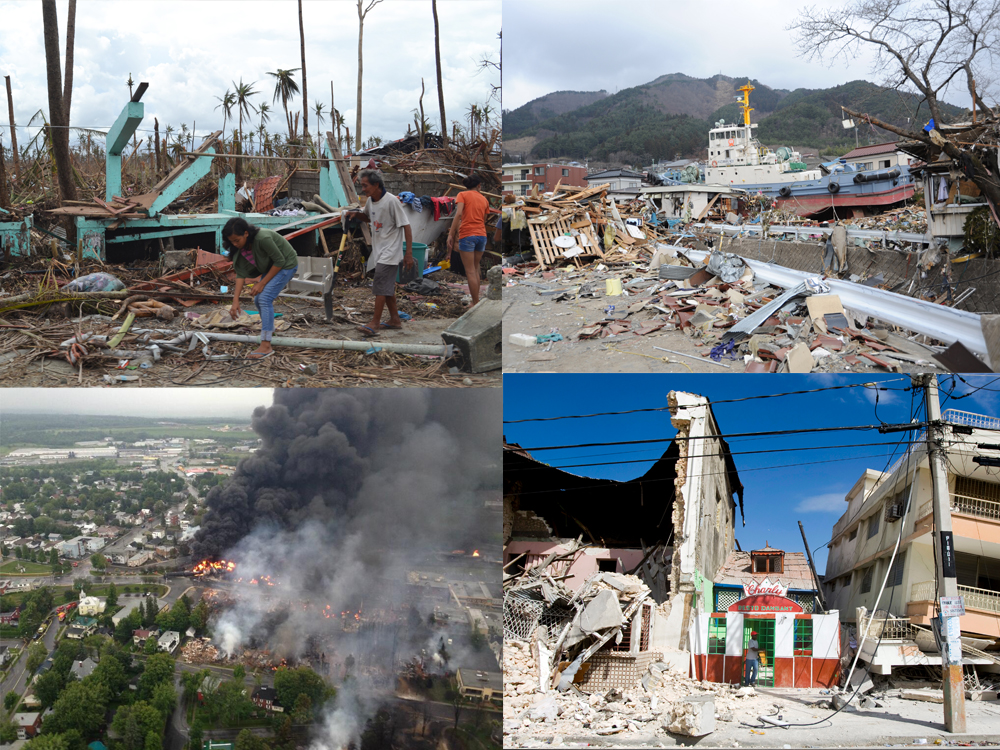 Disasters can happen far away, or close to home. They happen on varying scales – from a single community to an entire country or region. But what they always have in common is people.

Lives are changed and communities must re-build themselves. Many Canadians have family and friends all over the world, and when disaster strikes, they must deal with the fear and uncertainty that often comes when infrastructure has been damaged and communication lines are severed. But even for those without personal connections, the urge to help is strong. People all over the world join together to help, whether by giving money or goods, or volunteering time and abilities. At CanadaHelps, we’ve witnessed these beautiful and bold acts of generosity.

It’s been nearly a month since intense rain flooded the Balkans, a little more than six months have passed since devastating Typhoon Haiyan hit the Philippines last November, and this June marks the one year anniversary of the Calgary floods. Over the next month, we’ll be featuring stories from charities and volunteers as part of a new CanadaHelps’ series on crisis relief, an exploration of the way our lives are impacted when disaster strikes at home and abroad. We’re honoured to be sharing the stories of volunteers, as well as Global Medic, Habitat for Humanity, the Calgary YWCA, and the Calgary Zoo.

When we developed our Crisis Relief Centre, we knew that people are compelled to help during disasters but don’t always know where to turn for up-to-date information. We gather relevant information from government and humanitarian sources in one place.

We also know that determining which charities are providing relief can be difficult, which is why we work with our charity partners right across the country to provide a curated list of those charities providing relief and an easy way for Canadians to donate. We give donors the option to give to both small, less well-known charities that do incredible work during disasters or who are affiliated with a particular country or cause, as well as all the larger charities that provide crisis relief.

Some of these charities are on the ground providing direct relief, while others are supporting relief through fundraising efforts and long-term aid. Canadians can easily and securely donate online directly to any of these charitable efforts with confidence that their funds are going to the right place.

Global Medic
Imagine plotting the world’s largest disasters on individual graphs.  In most, but not all cases, there would be an initial “spike” of destruction immediately following the catastrophe. This spike would represent the first few days of chaos, and as the damage gets surveyed, assessed and eventually treated, that spike would slowly slope downwards towards normalcy.  When Global Medic, an arm of the David McAntony Gibson Foundation, looked for local reports of damage after Typhoon Haiyan, they were shocked.
Read now >>>

YWCA Calgary
In June 2013, the flood of the century hit Calgary and left many of its residents scrambling to find a safe and dry place to sleep. More than 80,000 Calgarians were forced to leave their homes near the city’s two rivers. The YWCA was forced to evacuate two of its shelters for women and children fleeing violence, and temporarily suspend programs. In the midst of a massive flood, these families would have to leave the only security they had.
Read now >>>

The Calgary Zoo
The Calgary Zoo, like so much of Calgary and surrounding areas, was hit very hard during the 2013 floods. With the added stress of being located on an island in the city, and having to care for hundreds of animals – from the very small to the extremely large (and potentially dangerous) – zoo employees performed heroic feats, and the community rallied around them to get through the crisis.
Read Now >>>

Habitat for Humanity
Housing is one of the most critical short and long-term priorities in the wake of a crisis. In the aftermath of a disaster, access to shelter – along with the other basic human needs of food, water and health care – is essential to survival. What makes providing shelter unique among these needs is the role that a safe and decent home plays in rebuilding communities long after the disaster or crisis itself, as families embark on the long journey to rebuild all they have lost.
Read Now >>>

Volunteer Stories
Have you ever wondered what it’s like to volunteer during a disaster? Or why people choose to do it? The work is often hard, and the days are long. But the dedicated teams of volunteers that travel to international disaster zones know that it is all worth it to help local people rebuild their lives.
Read Now >>>

One Response to “When Disaster Strikes: An Exploration of Crisis Relief”