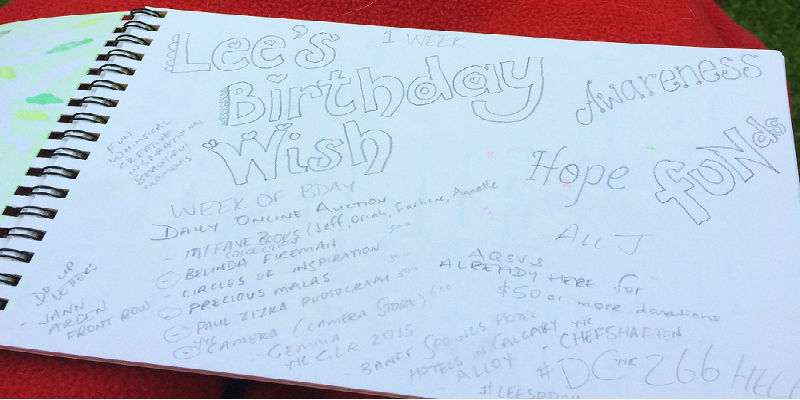 How do you thank someone for saving your life?  Ask Lee Horbachewski.  With a simple Birthday Wish of Hope, Lee has made a huge charitable impact, all by raising funds through CanadaHelps.

On Friday October 22, 2004 I was ready to end my life.  I wanted to end the pain and desperation caused by the depression and anxiety that plagued me.

Thankfully, at the front of the Yellow Pages was a number for a 24-hour crisis line provided by the Distress Centre Calgary. With great fear and trepidation, I called the line.  A woman answered, and I felt an uneasy knot in my stomach.  I remember her calm, soothing voice reassured me. She was caring and helpful, listened attentively, and didn’t judge me. For the first time, I felt someone really understood and cared.  The Distress Centre saved my life, and because of that, I wanted to say thank you.

When my best friend Sandra passed away in 2011, we honoured her life by raising funds for the Agape Hospice, the home where she spent the last few weeks of her life. Thanks to a beautiful message from Sandra’s favourite singer, Michael Bublé, sent a week before she passed away, donations to our CanadaHelps Sandra’s Butterfly campaign came from all around the world.  We raised over $10,000 for the Agape Hospice.

I hosted another successful Birthday Wish of Hope campaign in 2012, and in September 2013, my daughter hosted her own CanadaHelps Birthday Wish campaign in honour of her 14th birthday.  She raised $4375.00 for the Invermere Companion Animal Network (ICAN) in British Columbia.

This year, I wanted my campaign to be filled with gratitude and giving in honour of the priceless gift the Distress Centre gave me nearly a decade ago. My initial ideas for my Birthday Wish of Hope campaign were quite elaborate.  I wanted to create a website, online auction and an event to raise funds. Since I had just surfaced from a depressive episode, I knew this would be too much to undertake, and I decided to return to CanadaHelps once again to host my fundraising campaign.  Setting up a fundraising page is simple, tax receipts are dispersed to donors right away, and CanadaHelps makes it easy to monitor fundraising progress.  My goal was to raise $2500.

In one of the most touching moments of the campaign, our new neighbours who recently moved from overseas, came over with their nine year old twin daughters one Saturday afternoon. The girls gave me a birthday card with $62.00 in the envelope, and of that money, $12.00 was the twin’s very own savings. Their parents told me how they talked to their daughters about the Distress Centre, and I told them about the Calgary ConnecTeen program, a program run by the Distress Centre providing support for teens.  It was amazing to see the message of hope touch their young lives.

To make my fundraiser even more exciting, my generous and supportive friends helped me round up some great daily draw prizes for those who donated to my Birthday Wish of Hope campaign on CanadaHelps.  We gave away meditative malas, photography, organizational solutions, hair styling, a camera, painting, and even drew daily winners for front row Jann Arden tickets.  I also donated a signed copy of my book, A Quiet Strong Voice, to anyone who donated $43.00 to the campaign in honour of my 43rd birthday.

Incredibly, in just 14 days, my Birthday Wish of Hope raised $10,000 on CanadaHelps! Thanks to the power of social media, I received donations from as far as the United Kingdom, the United States, and my parents in Australia. In honour of a $5000.00 donation made by Sandra H., donating in honour of her nephew who battles depression, I decided to direct all funds raised through my Birthday Wish of Hope campaign to the Calgary ConnecTeen program to support teens just like Sandra’s nephew.

So how did I thank someone for saving my life? I gave back, and CanadaHelps made it so easy to do so.