GivingTuesday Canada is a national day for giving and volunteering co-founded in Canada by CanadaHelps and the GIV3 Foundation.

Most people know about Black Friday and Cyber Monday, but do you know about GivingTuesday? Get ready, because Canada’s second annual GivingTuesday happens on December 2, 2014. Here at CanadaHelps we are committed to ensuring the movement continues to grow and reaches as many Canadians as possible.

GivingTuesday marks the opening day of the giving season. The Tuesday after Black Friday and Cyber Monday, the movement encourages individuals and organizations to join together and find innovative ways to give back to the charities, causes they support, and their communities throughout the holiday season.

CanadaHelps, along with GIV3, brought the GivingTuesday movement to Canada last year, after watching first hand the power of the movement created in the US in 2012 by the 92nd Street Y, in partnership with the United Nations Foundation and a group of notable founding partners ranging from charities to corporations. We were thrilled and proud to take part in this incredible movement, and the success experienced in the first year was inspiring and surpassed our wildest expectations.

What happens when over 1300 Canadian charities and businesses come together in a collective, grass roots effort to launch engaging campaigns that promote giving back on the same day? The data we collected at CanadaHelps showed that Canadians responded very generously! 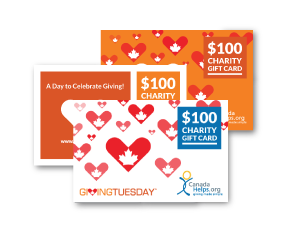 The results of the day also demonstrated that the GivingTuesday movement struck a chord with Canadians:

All of this information leads to conclusion that GivingTuesday was a HUGE success in Canada last year.  We were thrilled to see Canadians respond positively and take part in this global movement. More than 10,000 partners in 43 countries contributed to GivingTuesday in 2013.

GivingTuesday 2014: How YOU can get involved!

Based on the tremendous success of GivingTuesday 2013, we are thrilled and eager to continue this movement in Canada to ensure that GivingTuesday 2014 gains even more momentum with Canadians, and has an even bigger impact. GivingTuesday is for ALL Canadians, and everyone can get involved. Over the next few weeks, check back here every Tuesday for ideas and examples of how you can join in!