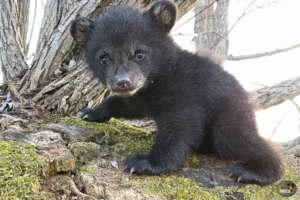 Below is a summary of the interview between Marina Glogovac and Mike McIntosh, Founder and President of Bear With Us. This interview has been edited for length and clarity.

Earth Day on April 22nd is a yearly call to care for our planet — an issue that gets more urgent each year. We can all play a role, whether it’s volunteering time or donating to conservation efforts, advocating to our leaders for systemic changes, or paying particular attention to the goods and services we use and their subsequent impact on the environment. But caring for the environment extends beyond the damage environmental destruction has on human lives, and to all the ways we interact with the natural world — especially the animal world.

Bear With Us, a small charity located in the Almaguin Highlands in Sprucedale, Ontario, is led by Mike McIntosh and his wife Ella. The pair have devoted their lives to rescuing and rehabilitating an often misunderstood animal: the black bear.

The organization is dedicated to educating the public about black bears and how to coexist with them, as well as rehabilitating orphaned and injured bears and then returning them to the wild. They currently have 76 bears in care that will go back to the wild this summer. McIntosh explained that orphaned bears are often a result of hunting seasons. When mother bears get shot, cubs can’t survive on their own.

“We got two cubs on the 29th of March—one is almost 3 months old, the other one is between 14-15 months old and was so weak it couldn’t stand up and walk,” said McIntosh. “Some good people picked up the bear, put it in a dog crate, and drove halfway to meet me so I could pick up the cub. That one is in very bad shape. It may not make it. But so far it is day 3 and it’s still alive.”

Bear With Us began in 1992 out of McIntosh’s personal passion and love of all wildlife, especially those animals that are misunderstood. Beyond rehabilitating orphaned and injured bears and providing education at Provincial Parks and schools about the black bear, the organization also acts as a permanent sanctuary for non-releasable bears. The bears living in the sanctuary include ex-circus bears, zoo excess, or illegal pet confiscations.

For the bears’ safety and to enable a successful return to the wild, the organization limits the bear’s interactions with humans — making them a rare charity that hasn’t been hurt by pandemic restrictions. But that didn’t change the need for or urgency of their work this year.

“2020 was the busiest year we’ve ever had and this was not due to COVID. It was the fact that the natural environment for bears this past summer wasn’t very good. Poor berry crops or fall nut crops caused bears to go to human-sourced foods, hunt or bait sites, which is how they get shot. That’s why we had a high influx of orphaned cubs.”

The organization hopes that, through their efforts, they can begin to erase some of the damage done by films and documentaries touting bears as animals to be feared. Bear With Us believes that bears are animals worthy of respect and understanding. “We try to get the educational message out. Hopefully, people give bears a break.”

Bear With Us is closed to the public for the bears’ safety, but they do offer glimpses of the bears via their Facebook page.  Learn more about their work on their Charity Profile page.

3 Responses to “Marina’s Picks: Bear With Us”