This post was provided by Manon Barbeau, founding-director of Wapikoni mobile, as part of the Ashoka Canada Fellows: Social Innovation Demystified series.

Wapikoni mobile is a fully equipped travelling studio that reaches out to First Nations communities, giving a voice and empowering youth through filmmaking and music production workshops.

The starting point: The power of art as a means of resilience

I have always wanted to give a voice to marginalized people. Maybe it’s based in my own history. My father was a painter, my mother a poet; they left my brother and me in foster care when I was two years old. So I had a marginalized childhood, with parents that had signed the Refus Global, signalling Quebec’s transition to modernity. But this left me without a family. It was poetry that first enabled me to survive. It made me believe that resilient people can reframe their relationship with the world and transform themselves through artistic creation. As an activist filmmaker, I then gave my schizophrenic brother a voice in “Les Enfants de Refus Global” and later to street youth, prisoners, and those that roam the back lanes.

For the last ten years, I have dedicated my time and energy to First Nations youth (the marginalized of the marginalized) with the Wapikoni mobile project – travelling audio-visual studios – which I founded in 2004.

Wapikoni mobile was born in the Atikamekw community of Wemotaci. The suicide rate among young people was very high. I was there to write a feature-length film with a group of 15 young natives. My faithful collaborator was Wapikoni Awashish, 20 years old, and a model of leadership. However, in May of 2002, Wapikoni’s life abruptly ended when her car hit a forestry truck. Too deeply affected to continue working on the screenplay, I imagined putting together a travelling video and music studio, which would become a creative gathering place. Wapikoni mobile, co-founded with the Atikamekw Nation Council and the First Nations Youth Council, is named in honour of Wapikoni Awashish.

The First Nations are among the most vulnerable populations in Canada – poverty, suicide, drug and alcohol addiction, dropping out of school, and isolation are ravaging these communities. But with a rich and far-reaching culture such as theirs, these communities are filled with talented young creators that have a lot to say, and whose voice deserves to be heard.

Wapikoni was created to give a voice to First Nations youth, break the cycle of isolation, reduce addiction and suicide, develop skills, stimulate their self-esteem and hope for the future.

Wapikoni’s mandate is mediation – the films and music created by the young natives are as many attempts at bridging the divide between them and other natives, and non-natives.

Innovative and unique, Wapikoni is the only travelling studio in Canada (perhaps the world) that travels towards isolated native communities to offer audio-visual training workshops. This nomadic aspect is particularly appealing to young people.

Wapikoni’s success rests on its practical and inclusive approach, its tools – video and music – valued by all young people, and on its close relationship with local organisations.

Ten years later, Wapikoni has touched over 3,000 young natives from 9 Nations in 25 communities across Canada. Wapikoni is also active in Chile, Bolivia, Peru, and Panama. More than 650 short films and 450 musical recordings relate the contemporary reality of First Nations youth and their empowerment.

Wapikoni is my extended family. Some have distinguished themselves and have given me much happiness. Their names are Marie-Pier, Réal, Kevin, Raymond, Janie, Allyson, Canouk, Samian, Abraham, Elisa. They are filmmakers and musicians, cooks and mechanics. Some have gone back to school. Because Wapikoni travelled to their communities, their life has found meaning – just like mine. 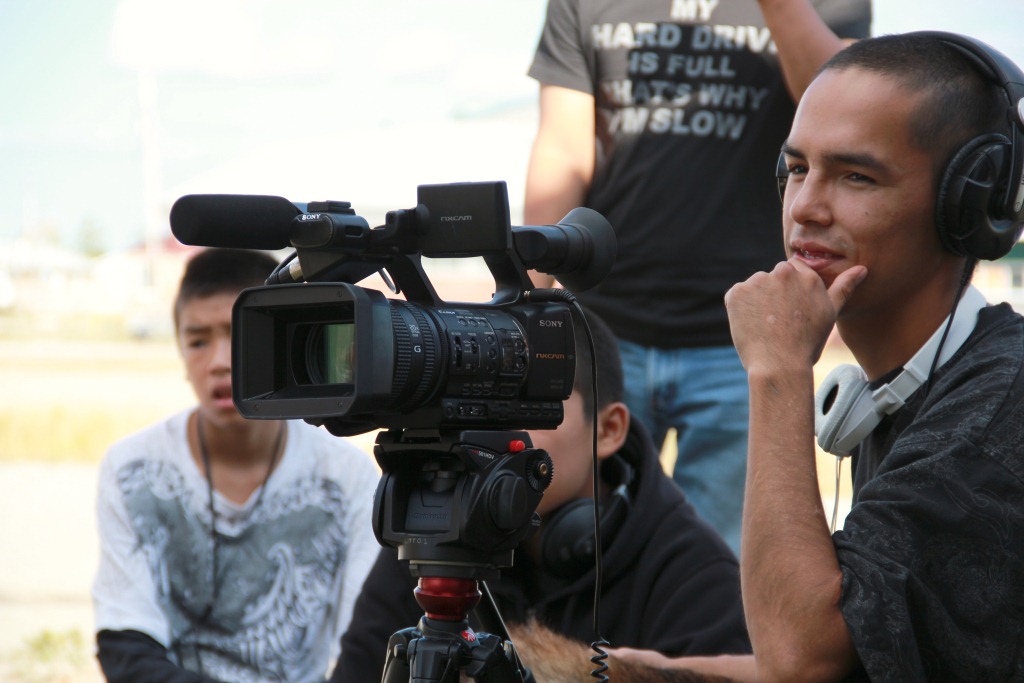 To learn more about this charity, visit their charity profile page >>

In this video: On a blank chalkboard, youth from Manawan rewrite the stories of their lives.

In this video: A music video by Ti-John Ambroise, who evokes the destruction of Mother Earth and is concerned for future generations.