This post was provided by Karim H. Ismail, a volunteer at The Spark of Hope Foundation as part of our refugee series, Leaving Home: A Series Exploring the International Refugee Crisis. The multi-part blog series features stories from those on the ground, as well as the response from charities and Canadians across the country.  In this blog, we learn of one Palestinian woman living in a refugee camp who has now been granted access to education because of the generosity of Canadians. 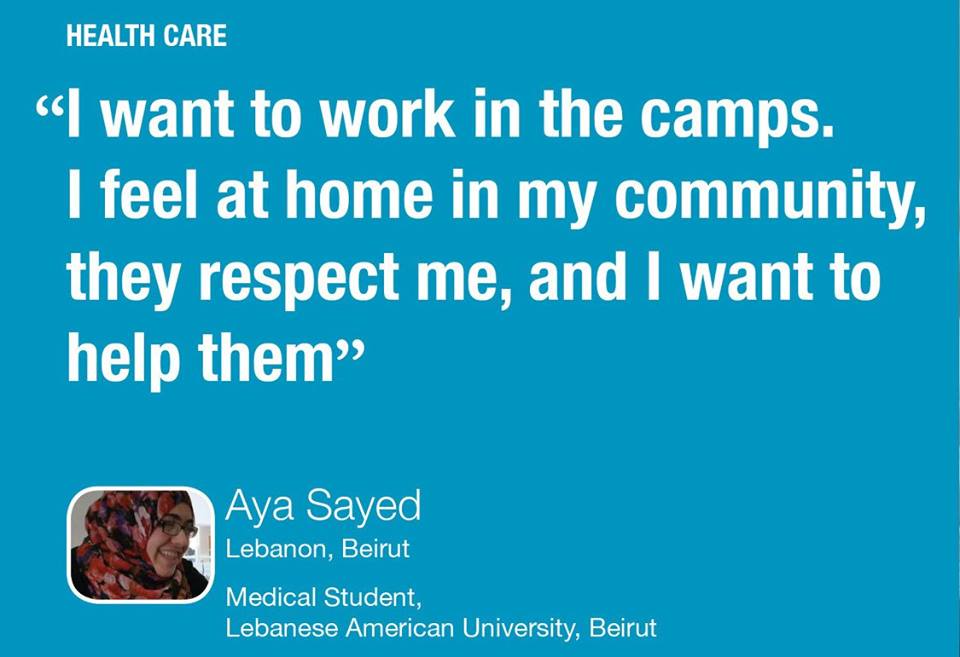 Aya Al Sayed is a 25 year-old Palestinian refugee currently studying medicine at the Lebanese American University in Beirut where she is completing three years of her studies and hopes to pursue pediatrics. Like most medical students, Aya faces long days in class, followed by an intense daily study schedule that goes into the early hours of the morning. It’s an all-consuming commitment that Aya has wholeheartedly embraced.

Aya comes from the Ein el Helweh camp, one of the most populated and volatile refugee camps in Lebanon, which in its 67 year history, has been subject to intense bombardment, frequent fighting, and poor living, education, security, and health conditions, which pose a constant challenge. Aya’s father is unemployed and her mother passed away two years ago due to cancer and a poor health care system. She has two brothers at university who are also working at the same time to support themselves and their family.

Inspiring One Mind, and Helping so Many Others

Aya has always been a top student. She has completed a bachelor’s degree in science with distinction at the American University of Beirut, and with a high GPA, she earned admission to the competitive medical program at the Lebanese American University.

While Aya’s story is already one of incredible perseverance and dedication, it is the chapters that are yet to be written which will likely be the most remarkable.

While many young doctors might plan for a career in private practice, at a hospital, or in research outside of Lebanon, Aya is determined to improve the care of Palestinians who endure conditions in refugee camps in Lebanon that would be unfathomable for most of us. But before Aya returns to work in the refugee camps in Lebanon, she hopes to volunteer with Médecins Sans Frontières in South Sudan so she can help improve the level of care for children there in particular. As a volunteer, she will earn a pittance and face a daily caseload that will easily exceed 100 patients.

“I want to come back to work in the camps. I feel at home in my community, they respect me, and I want to help them.” – Aya

It is the limitless impact of supporting Aya’s education that is almost impossible to quantify or qualify in terms of the lives she will touch directly, and the lives that will be inspired by her.

The Spark of Hope Foundation is pleased that together with the Lebanese American University and other partners, we have collectively been able to ensure Aya receives top quality medical education.

The Spark That Got Us Started:

When we began our charitable work in April 2014, we had no funds, students, university or on-ground partners, board members, or charitable status.

Our focus is young women who can become tomorrow’s leaders, but lack the financial means to afford a quality university-level education. With access to education, we can ensure that the students we help will go on to make huge family and community impact, often impacting thousands of lives as doctors, engineers, journalists, lawyers, managers, scientists and teachers. But above all, they will advocate for change.

To make this happen, we have two universities co-funding collaborations, with three more in progress. We also have on-the-ground partners in Syria, Lebanon, Pakistan, Kenya and Bangladesh, and supporting this all is our experienced board of directors and many volunteers who help make this happen. What differentiates our work is that we also provide university preparation support, support during university years, and post-university support.

Beginning this September, we have built up the capacity to develop 1,400 young female leaders over the next 10 years. The approximate cost to do so in today’s dollars is $166 million Canadian, and of this amount, we can count on co-funding commitments for $121 million, equaling to 73 percent, leaving $45 million needed to help these young women achieve their dreams and make a transformational impact in the world.

To learn more about The Spark of Hope Foundation, or to make a donation to help tomorrow’s female leaders access education, please visit their Charity Profile Page >>>