It was another exciting year for CanadaHelps as we celebrated another great GivingTuesday! To mark the movement’s fifth Canadian anniversary, CanadaHelps visited five Canadian cities from coast to coast to spread the GivingTuesday cheer across the country. To help our team celebrate, we were joined by several charities and civic movements and together we distributed thousands of $3 CanadaHelps Charity Gift Cards to encourage Canadians to choose their favourite charity and donate the funds on the gift card.

Here’s who joined us bright and early to celebrate GivingTuesday 2017: 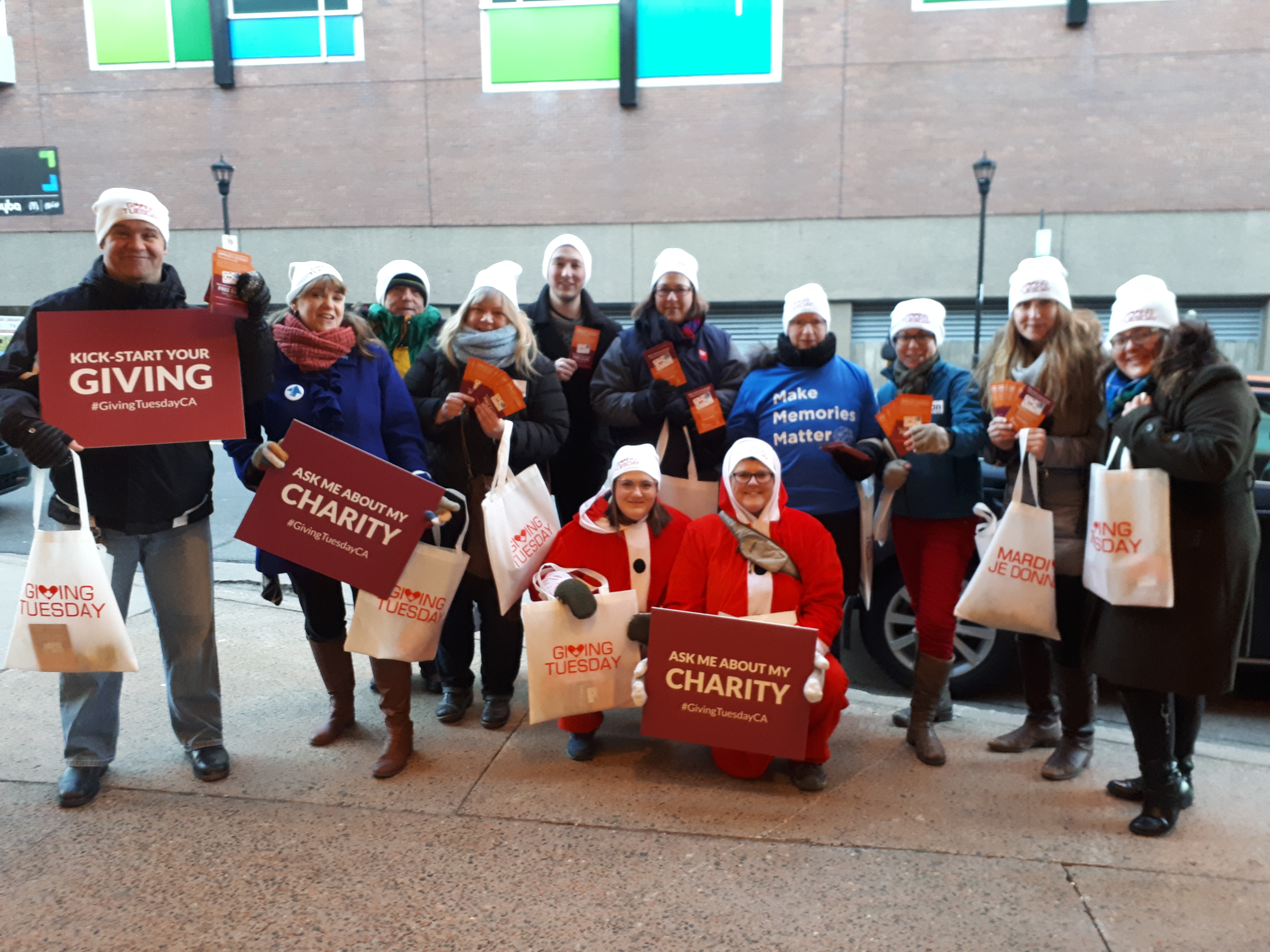 Back at Yonge and Dundas Square for a third year, the CanadaHelps team was joined by Future Possibilities for Kids (FPK) to help hand out $3 Charity Gift Cards to a few thousand lucky Torontonians. Since 2001, FPK has delivered leadership and life skills programs to thousands of children from underserved communities, at no cost to their families. Their programs help kids take part in community service projects that are meaningful to them and that will better their neighbourhood, such as raising awareness about littering, opening up a welcome club at their school for new students, or advocating for an accessible playground in their community. 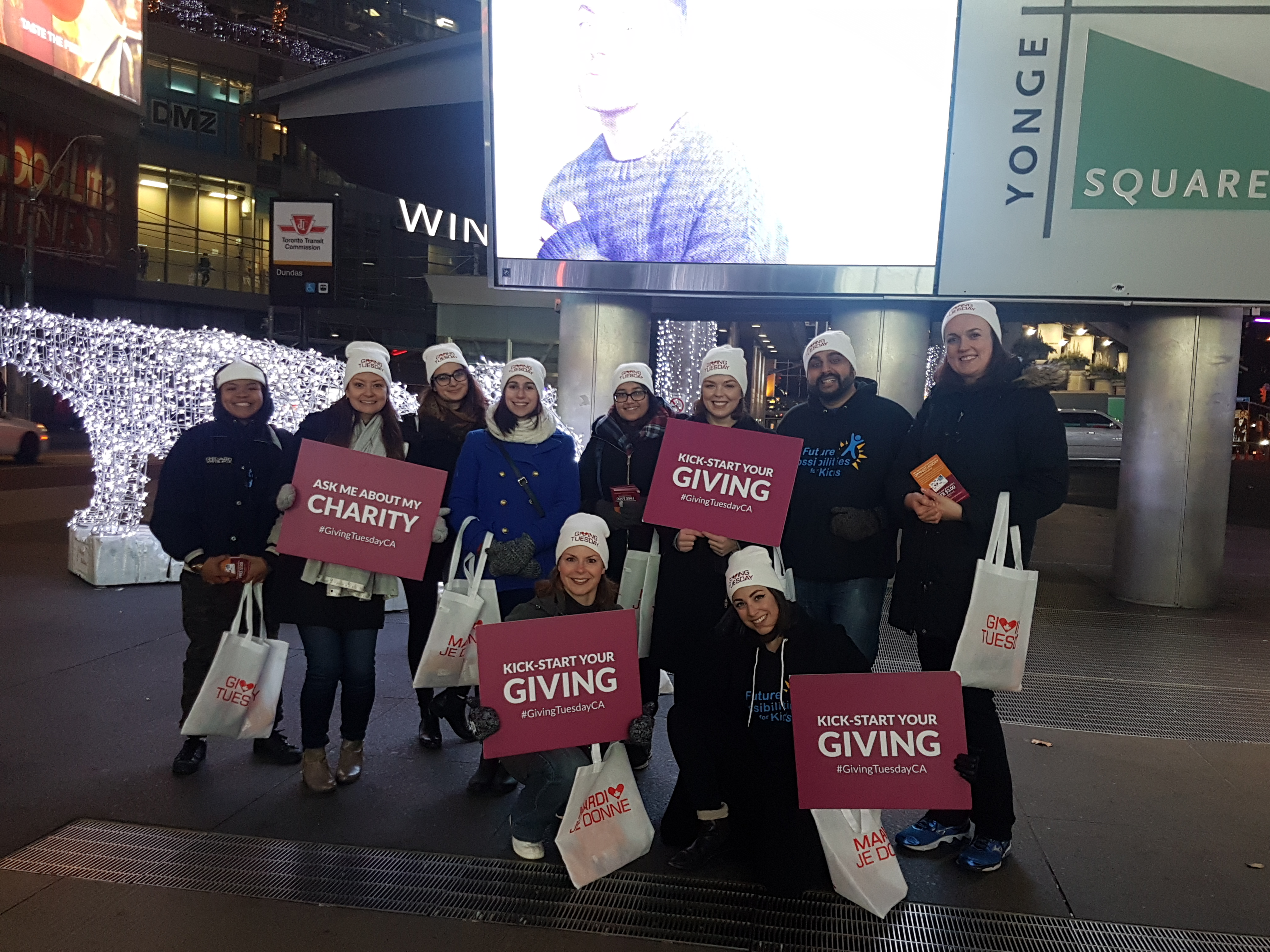 Outside of Guy-Concordia station, CanadaHelps was joined by Welcome Hall Mission, NDG Food Depot, and GIV3 who generously volunteered to help give gift the giving and distribute $3 Charity Gift Cards to hundreds lucky Montrealers.

Founded in 1892, Welcome Hall Mission is now the largest doorway to help for Montrealers in need. A wide variety of programs are offered to support the homeless, young at-risk mothers, families and youth. Welcome Hall Mission aims to restore their hope through concrete actions and effective solutions that help them improve their lives and reintegrate into society.

NDG Food Depot, has been a collaborative community leader in food security working to reduce hunger, poverty and social isolation for over 30 years. They bring people together to grow, cook, share and advocate for good, healthy food for all. Programs in food access, skill development and urban agriculture engage people of all ages, respect human dignity and build towards a healthier, more resilient community for the long term.

And last but not least, GIV3 is on a mission to encourage Canadians to be more giving by donating, volunteering, and inspiring others. GIV3 is the proud co-founder of the GivingTuesday Canada movement alongside CanadaHelps. 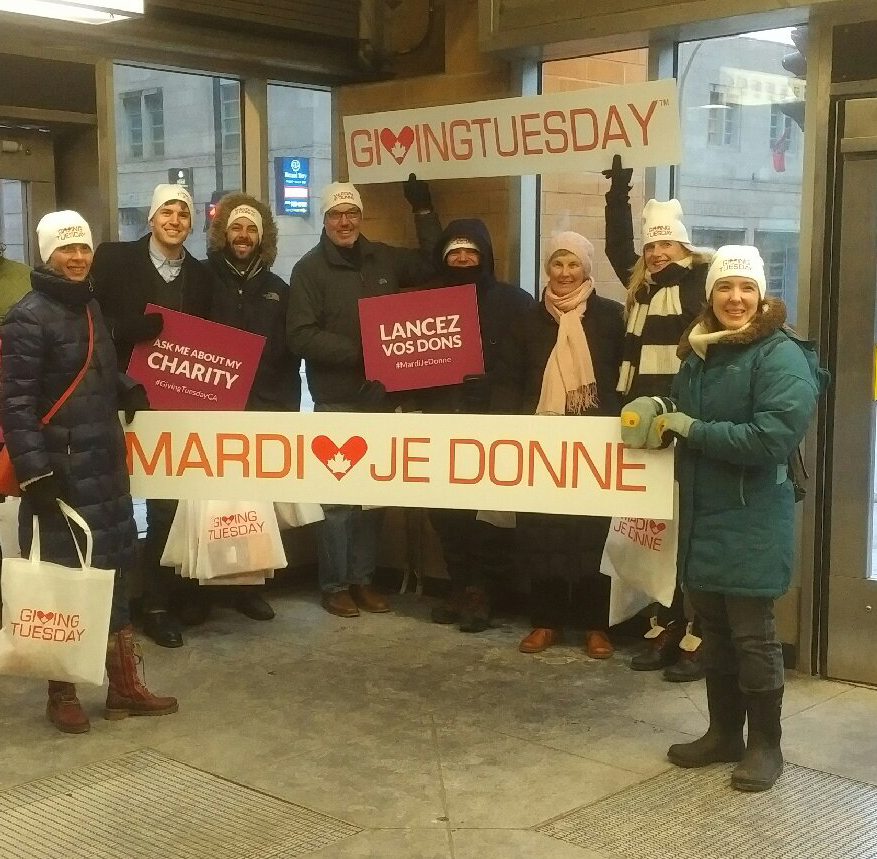 In Calgary, the CanadaHelps team was joined by our friends at the Brown Bagging for Calgary’s Kids (BB4CK) outside of Olympic Plaza to help hand out $3 CanadaHelps Charity Gift Cards. At BB4CK, their team works to ensure that healthy lunches are provided to students who would otherwise go hungry. Over 3,800 lunches are made and delivered each school day to Calgary schools – an increase of more than 50 percent in the last two years. Nearly every lunch is made and delivered by a volunteer, with more than 600 people giving time each week. 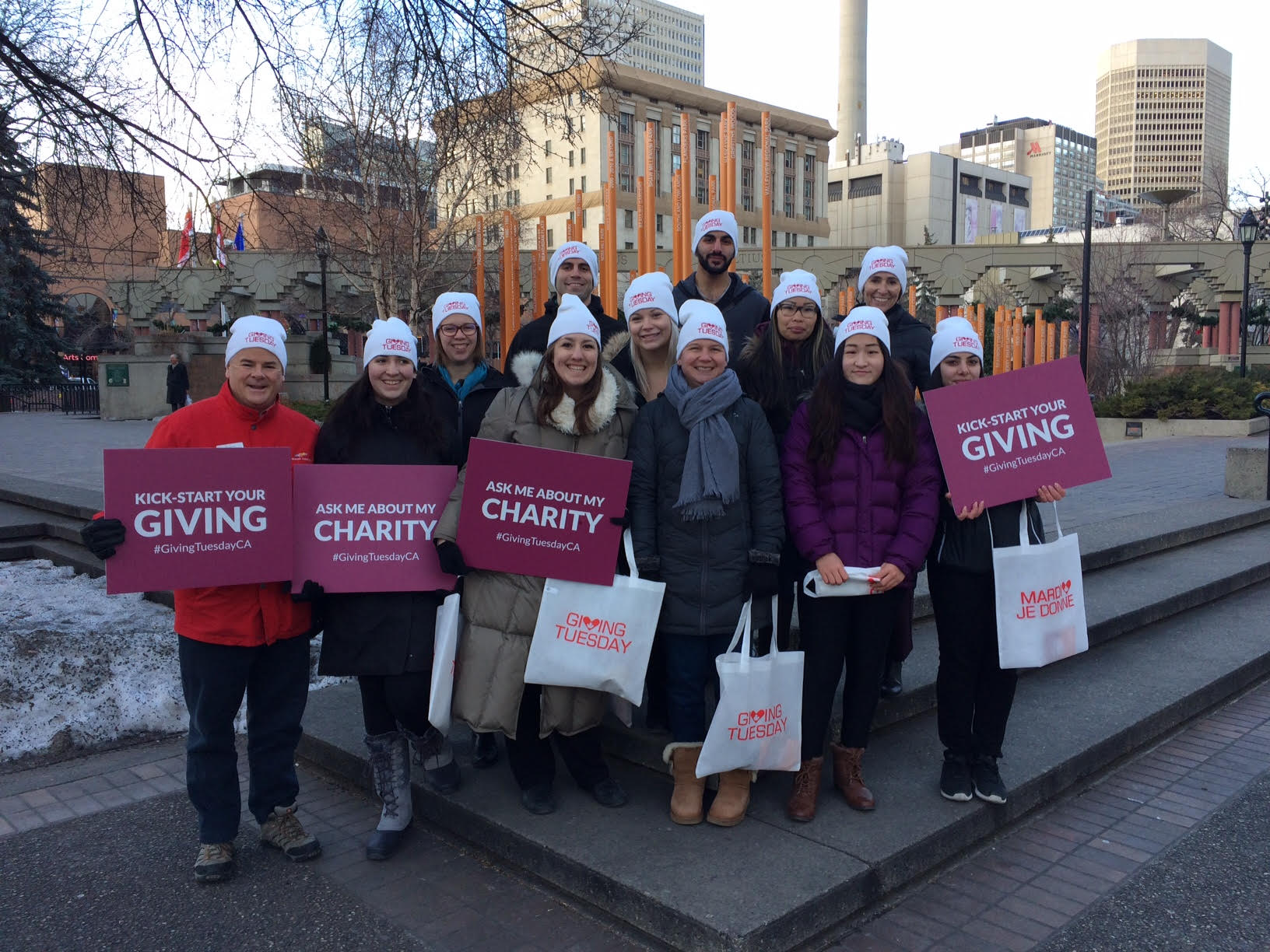 And finally, GivingTuesday was celebrated on the West Coast as CanadaHelps was joined by the #VanGives team to help hand out $3 Charity Gift Cards outside of Waterfront Station. The #VanGives civic movement calls on Vancouver-based charities and residents to shares inspiring stories and encourages generosity in Vancouver on GivingTuesday. The team was joined by Growing Chefs!, the Take a Hike Foundation, and the Salvation Army of British Columbia to help spread the GivingTuesday cheer! 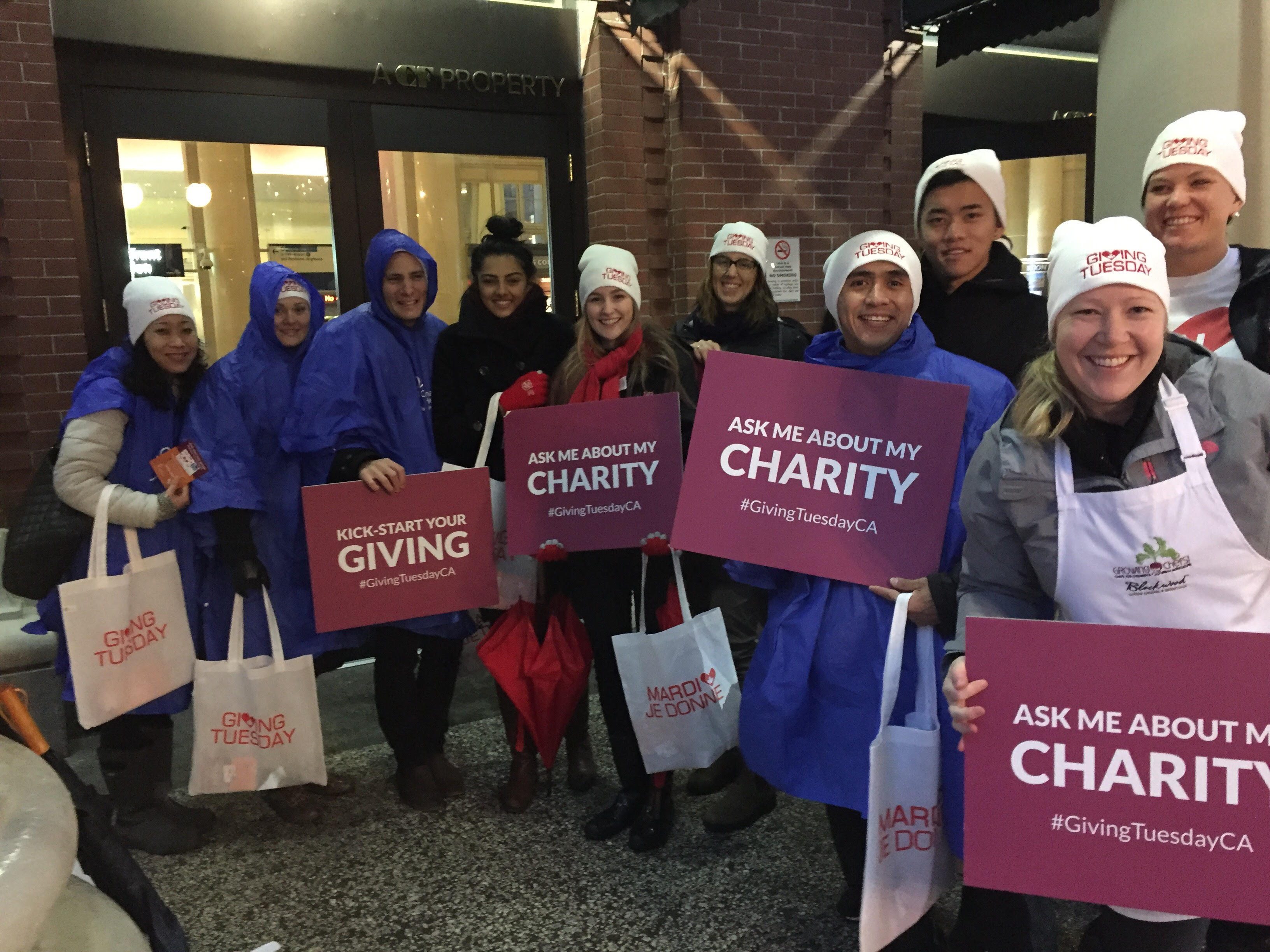